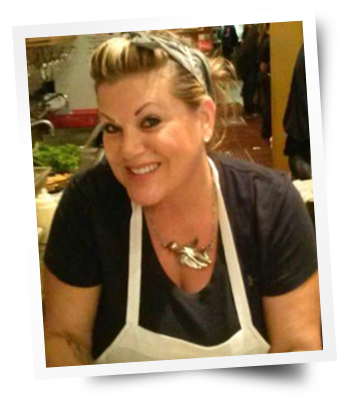 Jamie started with a background in the marketing and advertising world. For over 10 years she helped many local businesses in Silicon Valley succeed in their dreams. She also saw many fail.
After a few major car accidents she realized life is too short and she couldn’t go back into a career that didn’t make her feel at her best. So she decided to follow her passion for cooking and baking that started at a young age.

Her father was a chef, and her grandma and nonna were amazing bakers. These were the role models in her life. So she decided in her pursuit of happiness to follow her dreams, went to culinary school and graduated in January 2013, delivering the speech at the ceremony in honor of her grandmother. Her inspiration and her BIGGEST fan had passed in October from cancer. She knew that whatever she did going forward it would be in part to help people achieve a healthier lifestyle through food. After all Food in part is what makes our bodies sick and/or heals us.

While in school she worked with the catering department and got a taste of what it was like to serve in the industry. She also worked at a sushi restaurant and set her goal to be a sushi chef. Which she did! Working her way up the latter she made it behind the Sushi bar rolling up glorious edible art. She then moved on to help open a few restaurants and then decided it was her turn.

“It’s not about the flashy names of chefs or restaurants, it’s about the passion behind the creator. I don’t need a fancy named school or a big named chef on my resume to do what I love. It’s my turn to make my dream come true. No one ever said it would be easy, That would take the fun out of it!

Jamie leads a healthy lifestyle through nutritious cuisine and keeps active. She believes in preparing fresh, nutritious meals to assist her family in maintaining a healthy lifestyle. Using mainly Organic ingredients and non-processed foods. She believes her clients should eat the same type of food she would feed her family.
Her clients range from single individuals and families to professional athletes, local celebrities, real estate agencies, financial advisors, startups, high-tech businesses, churches, high rise communities and more.
One day the Lord gave her a vision…This vision is being fulfilled through this company. To serve and to lead others. To be the best YOU can be, to believe in yourself, and to love what you do!
Jamie is the executive chef for Holy Cannoli! Cafe LLC
Jamie is also the secretary of her car club, Cadillac Classics and owns a 1967 Cadillac Convertible which she drives every weekend to church or car shows. She is also a volunteer at Jubilee Church in Silicon Valley & helps Feed the homeless weekly.